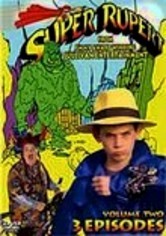 2001 NR 2 discs
This collection of episodes from the charming television series stars Adam Butcher as 11-year-old Rupert Patterson, who believes he's a real superhero. Equipped with a big imagination -- fueled in part by his comic book collection -- and a homemade arsenal of cool gadgets, Rupert's ready to do some good. Transforming into his alter ego, "Super Rupert," he sets about to "save" the citizens in his hometown from unseen evil forces.