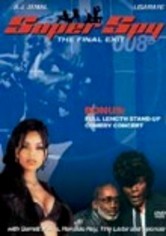 2003 NR 1h 24m DVD
In this urban comedy, an aspiring young filmmaker named Sherlock heads off to Hollywood in hopes of making a blockbuster action movie and becoming famous. Everything seems to be going as planned, with filming underway, until the cameras record something accidentally. What ends up on film will be something that all involved wish they'd never been associated with. Stars A.J. Jamal.