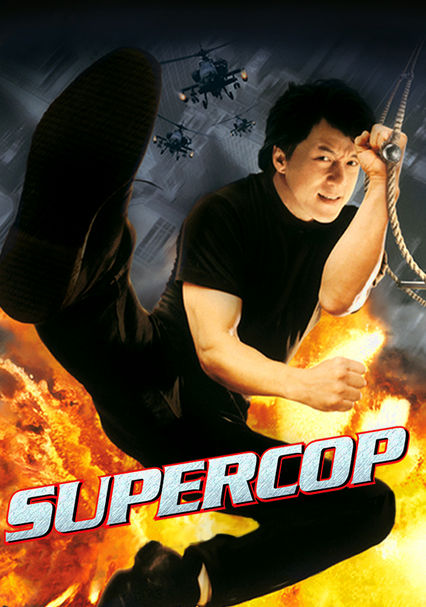 1992 R 1h 35m DVD
A Hong Kong cop goes undercover in mainland China to bust a drug-smuggling ring, breaking the leader's brother out of prison to gain the syndicate's trust. But when his cover is blown, he's forced to help the criminals pull off another jailbreak.

Parents need to know that even though Jackie Chan is generally a hit with kids, Supercop is one of his most violent movies. Playing an undercover cop, he is sometimes forced into violent, aggressor situations in order to keep up his cover. (Chan's movie character usually fights reluctantly, mainly in self-defense, and shows that fighting actually hurts.) Aside from the usual dazzling martial arts and crazy stunts, this one is full of gunfire, explosions, and other forms of mayhem, and the villains are drug lords. However, the tone is mostly comic and lightweight, with very little real consequences for the violence. The DVD contains the theatrical edit prepared for U.S. release in 1996, and comes with both dubbed English and the (preferred) original Chinese audio options.

Jackie and his girlfriend kiss a little and roll around on the bed, although their conversation has nothing sexy about it. A man dressed up as a woman loses his "breasts" when two rubber water balloons fall out from under his shirt. The crime boss orders "testicles" in a restaurant.

An usual amount of martial arts violence, and in a Jackie Chan movie, much of it falls in the arena of self-defense (Jackie rarely attacks). But it also has a huge amount of gun violence and explosives. There's a Tazer gun and a traitor is brutally drowned in a swimming pool. In one scene, the crime boss asks the undercover Jackie to shoot an assailant, and Jackie actually pulls the trigger, but (luckily) finds that his gun is jammed. The climactic fight on top of a moving train has some very dangerous-looking stunts as well. The end credits are full of painful looking outtakes.

A couple of uses of "scumbag" and "hell." And Jackie's undercover name is "Fuk-Sang," played for laughs.

A small lesson in gender equality: When Jackie first meets Inspector Yang he sees her only as a pretty girl to be flirted with, but as the movie goes on, they begin to use teamwork and learn to trust each other.

The bad guys are drug dealers, though we never actually see any drugs or hear any drugs mentioned by name. The drug in question is spoken about in measurements only.