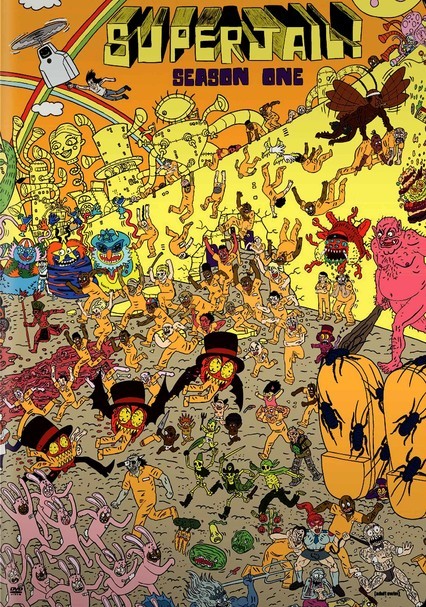 2007 TV-MA 1h 50m DVD
In a bizarre prison situated within an active volcano, the totally deranged Warden busies himself concocting a variety of hilarious schemes like holding a science fair, monitoring his inmates' dreams and inviting a motivational speaker for a visit. The rest of the prison staff in this graphically violent animated series includes uptight accountant Jared, brawny guard Alice, mute robot Jailbot and the Doctor.

Parents need to know that this hyper-violent cartoon definitely isn't meant for kids. Blood and gore flow freely as the characters engage in extremely brutal combat; scenes include dismemberment, impalement, and more. The jail setting also has plenty of sexually charged images (often involving stereotypically gay characters), including nudity, violent sex, group sex, and one female character with such obviously male traits that she's either a transsexual or in drag -- her ambiguous sexuality makes some other characters lust after her. Some episodes feature drinking; one character is a recovering alcoholic who's urged to fall of the wagon, to disastrous results.

Some animated nudity, and plenty of sexually charged situations and imagery. There are almost no women in the jail's world, and several scenes suggest homosexual behavior using stereotypical images -- including violent jailhouse encounters and group sex. One guard character appears to be either a man in drag or a transsexual; the show doesn't specify, but it does base some plotlines on Alice's mysterious sexuality.

Characters routinely engage in savage, gruesome fights using a variety of weapons and sometimes just their bare hands. Heads, arms, and legs are pulled off; people are impaled, cut in two, and worse; and there's plenty of blood and guts. Some fights occur in anger with little provocation, while others are staged for entertainment. The show seems to revel in its ability to shock -- all of this is animated, but it's still quite gruesome.

Few actual swear words, though there are plenty of sexually suggestive phrases.

Don't look for any positive take-aways here; the show revels in its hyper-violent, sexualized content and doesn't make any attempt to convey anything remotely positive.

A fair amount of drinking, sometimes to excess, that leads to impulsive behavior. One character, a recovering alcoholic, is mocked for trying to abstain and finally falls off the wagon.