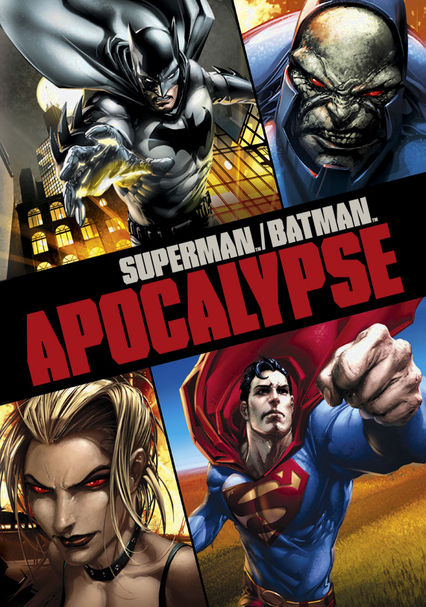 2010 PG-13 1h 15m Blu-ray / DVD
Endowed with powers equal to Superman's, Supergirl splashes down on Earth in the midst of a hail of Kryptonite. No sooner has she landed than the problems begin for the Caped Crusader, who must rescue her when Darkseid nabs her. To thwart Darkseid's plans to make Supergirl one of his Female Furies, Batman must join forces with Superman to confront the powerful enemies Darkseid has assembled around his control center in Apokolips.

Parents need to know that this sequel to Superman Batman: Public Enemies is part of a series of violent direct-to-DVD animated superhero movies aimed at teens, though this one is a little less packed with action and blood than usual. The story centers on a teen girl, Kara Zor-El, who must learn how to grow up, make her own decisions, and decide her own fate; she eventually decides to become Supergirl. Expect lots of fighting, with some guns, stabbing, and death and a little blood. Language is on the light side (just a couple of uses of "ass" and "hell"), and there are vague hints at female nudity, though nothing is shown.

In an early sequence, a silhouette of a naked woman is shown, and viewers later see the shadow of a naked woman. Kara (the future Supergirl) wears very skimpy outfits from time to time.

Lots of fighting amongst superheroes and super-villains, with heavy destruction and some blood. Viewers see guns and shooting, the breaking of a wrist, and a character stabbed through the chest. Perhaps most notably, a teenage girl witnesses her parents' death.

Language includes a couple of uses of "ass" and "hell."

When Kara Zor-El crash-lands on Earth, everyone around her has ideas about how she should behave, what she should do, and what her future holds. Over the course of the story, she's pulled in several directions, but she learns to make her own decisions and to decide her own fate (that said, the movie doesn't actually spend much time on this character, so her decisions are made suddenly and rashly). There's also a sequence in which Kara is taken shopping and learns to love the rush of consumerism.

Tie-in to vast quantities of related merchandise. In a "shopping" montage, Clark Kent buys Kara some clothes and she becomes euphoric with consumerism.