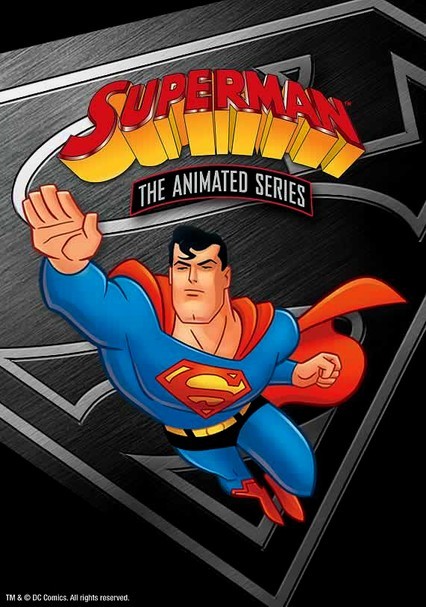 1996 TV-PG 3 seasons
The WB's animated take on Superman garnered an Emmy nomination and features anime-like graphics, fast-paced action and gritty story lines as it retells the story of Kal-El from the planet Krypton, who grows up to become a superhero on Earth. Disguised as reporter Clark Kent in his ordinary life, Superman (voiced by Tim Daly) uses his amazing physical prowess to battle villains such as Lex Luthor (Clancy Brown) and Darkseid (Michael Ironside).

Featuring the first 18 episodes of the action-packed animated series, this set of installments kicks off with the extraterrestrial's arrival on Earth and follows his ensuing double life as mild-mannered Clark Kent and the patriotic Man of Steel. Defending America from villains, the cape-clad superhero fends off myriad criminals, including his mortal enemy Lex Luthor. Extras include two shorts about Superman's friends and the making of the series.

Superman continues his mission to protect the innocent and rid the world of villains, including Lex Luthor, Bizarro, Metallo and Karkull in this 18-episode collection of the Emmy-winning animated series. This volume includes a three-part serial in which the Man of Steel is forced to partner with dark hero Batman to defeat a dastardly duo: the Joker and Lex Luthor. Tim Daly and Dana Delaney provide voices.

The Man of Steel's most formidable foe ever -- the Darkseid -- threatens world domination in this exciting 18-episode collection. "If you will not be my knight, then you will be my pawn" is the proclamation given to Superman (voiced by Timothy Daly) from this malicious master of mayhem. Can our champion of truth and justice save the day? Other voices include Dana Delany as Lois Lane and George Dzundza as Perry White.

Parents need to know that this take on the Man of Steel is a mature, serious cartoon. Although not quite as dark as other DC Comics spin-offs -- such as Batman Beyond and Justice League -- this adaptation still has its share of edgier content, including some innuendoes and violence.

Some innuendoes, and some female characters have slightly risque body language and attire.

Lots of dry humor -- nothing inappropriate, but over the head of some kids.

Superman is a noble role model with integrity who defends the greater good.