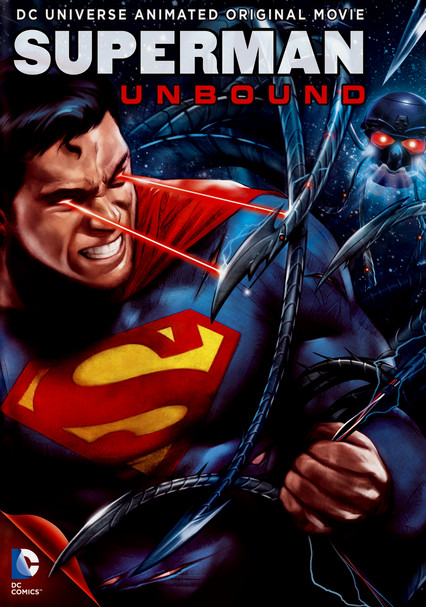 2013 PG-13 1h 15m Blu-ray / DVD
In this animated Man of Steel adventure, Superman has to muster all his physical and mental mettle to save Krypton's capital city of Kandor, which has been seized and miniaturized by the ruthless android Brainiac.

Parents need to know that Superman: Unbound is a straight-to-DVD feature-length animated movie that contains heavy fantasy/comic book-fighting, as well as terrorist attacks, guns and shooting, bombs, and missiles, plus some explosions (no casualties) and a little Super-blood. Superman and Lois have a relationship in this one, including quarrels and kissing. Lois and Supergirl both wear somewhat sexy outfits. Language is minimal, but Lois uses a double rude finger gesture in one scene.

Superman/Clark Kent and Lois Lane have an adult, romantic relationship in this movie. They have lovers quarrels and kiss, though it never goes beyond that. (Sex is never hinted at or mentioned.) Jimmy Olsen goes gaga when he sees cute Supergirl for the first time. Both Lois and Supergirl are dressed in sexy clothing.

There's lots of comic book-style fighting in this movie. Super-characters punch and pummel each other with tremendous force. Terrorists appear and threaten the city, shooting guns and threatening bombs. Brainiac steals cities and launches missiles, hoping to destroy planets. At one point, Brainiac catches Superman and some Super-blood is shown. During the opening credits, Brainiac undergoes some kind of gory transformation (an eye is plucked out, etc.).

"Hell" and "God" are used as exclamations. Lois gives a double-fisted, rude finger gesture to the bad guy.

Superman learns that trying to protect Lois Lane all the time stops them both from living life to the fullest. He also learns a lesson from Brainiac: one can't obtain knowledge or grow by trying to contain and control everything. Also, Supergirl learns to face her fears and overcome a traumatic experience in her life.