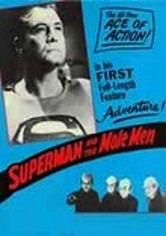 1951 NR 1h 0m DVD
Superman makes his film debut in this 1951 feature starring George Reeves as the Man of Steel, with Lee Sholem at the helm. Clark Kent and Lois Lane visit a small town to write a story about the world's deepest oil well and discover a race of subterranean beings. When a mob threatens to harm the Mole Men, it's Superman to the rescue. Also included is "The Making of Superman: The Movie" and nine 1940s Superman cartoons.