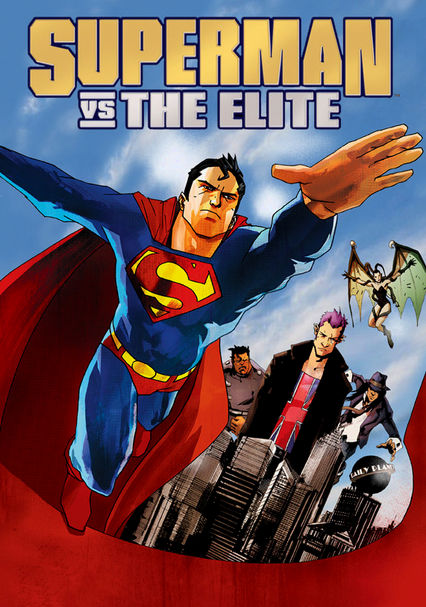 2012 PG-13 1h 16m DVD
Tensions between Superman and the Elite, a team of superpowered antiheros, finally culminate in a mass showdown on Jupiter's moons, when Superman is forced to prove that violence is never the answer.

Parents need to know that Superman vs. the Elite is one in a series of feature-length animated DC Comics superhero movies that have been released direct-to-video. Like the others, it's filled with fantasy and comic-book violence, though the movie's ultimate message is one of tolerance and fairness. Language is fairly frequent without being terribly strong and includes many British slang words, like "bugger" and "wanker," as well as several uses of "ass" and "damn." There's some sly but frequent sexual innuendo, and one major character seems to have a drinking problem.

Frequent sly innuendo. The Menagerie character clearly wants to sleep with Superman and keeps dropping not-so-subtle hints. (He has a "fine ass," she hopes he has the "stones to do me," etc.) In this story, Superman and Lois are married and have an intimate banter; they talk about kissing and eventually do kiss. Lois is shown in a nightie.

As with most of Warner's animated DC Comics superhero movies, this one is heavy on fighting and fantasy violence; in fact, violence is one of the movie's main themes. Lots of punching, pummeling, battering, smashing, and slamming, and images of war between two fictitious countries. Only a little blood is shown, usually trickling from noses or lips. Bad guys are tortured, and a little girl is in peril in a flashback.

Superman vs. the Elite takes advantage of Manchester Jack's hometown slang and gets away with some words that many Americans may not know. These include "sod off," "wanker," "tosser," "git," "jackholes," and "poncy twit." Also several uses of "ass" and "damn," plus "hell," "son of a bitch," "pissing," "bastard," "scum," "crap," "sucker," "sucks," "dungheap," "sphincter," "frigging," "freakin'," and phrases like "got a pair" and "give the finger." A character also says "oh God."

The movie champions justice and fairness -- acting selflessly and thinking about others -- rather than violence, anger, and revenge. As one character says, "When people get scared, they tend to jump on a bandwagon without thinking about who's driving."

Tie-in to vast quantities of related merchandise. One mention of "tweeting."

The character known as The Hat seems to have a drinking problem. He's almost always seen swigging from bottles of wine or a cone-shaped martini glass. At one point during a battle, he says, "I have to sober up!" In a flashback, the father of a young boy and girl is shown to be a mean drunk, throwing back several bottles, with booze dribbling down his cheeks.