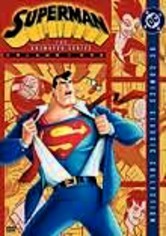 1996 NR 3 discs
Featuring the first 18 episodes of the action-packed animated series, this set of installments kicks off with the extraterrestrial's arrival on Earth and follows his ensuing double life as mild-mannered Clark Kent and the patriotic Man of Steel. Defending America from villains, the cape-clad superhero fends off myriad criminals, including his mortal enemy Lex Luthor. Extras include two shorts about Superman's friends and the making of the series.