Superstar in a Housedress 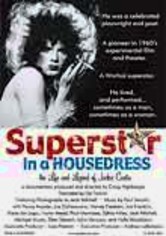 Superstar in a Housedress

2004 NR 1h 35m DVD
This warm documentary from Craig Highberger studies the life of drag queen legend and Andy Warhol protégé Jackie Curtis. The son of a dancer and a marine, Curtis grew up in New York above his grandmother's saloon and in time became a poet, playwright and a director. Curtis continuously tested boundaries and made transgender people feel at ease about who they were. Look for cameos from Lily Tomlin, Harvey Fierstein, Paul Morrissey and more.