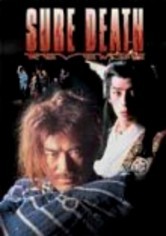 2000 NR 2h 10m DVD
Blamed for not preventing the assassination of a local ruler, disgraced samurai Mondo Nakamura (Makoto Fujita) sets out to avenge the death and reclaim his honor by solving a rash of killings plaguing the countryside. But the clues he uncovers incriminate another government official, so Nakamura sets his sights on exacting an especially terrible revenge. Kinji Fukasaku directs this martial arts film that co-stars Sonny Chiba.