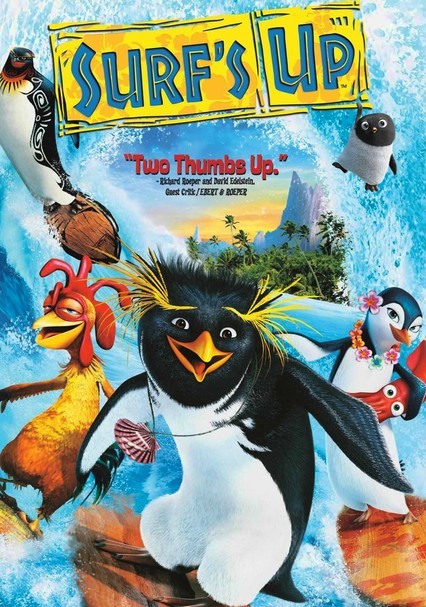 2007 PG 1h 25m Blu-ray / DVD
Film crews go behind the scenes at the Penguin World Surfing Championship to provide a close-up look at the inventors of surfing. (Yes, penguins were the first species to hang 10 -- or at least that's what this charming spoof purports).

Parents need to know that this animated comedy has been heavily marketed to kids, and those who liked Happy Feet will be particularly interested in seeing it. Although there's not much violence, there are a few mildly perilous scenes during the surfing competition and in old photos/footage. And (big surprise for an animated story) the main character has a dead parent -- in this case, a father who was eaten by a shark. There's some unfortunate potty talk (which parents might want to manage at home), a harmless flirtation between two penguins, and a surfing champ's bizarre attachment to his trophies, which he refers to as his "girls."

Cody flirts with and hugs Lani. Female penguins follow Tank, who, in turn, has an unusual, almost sexualized relationship with his surfing trophies (he even hugs and kisses them). His mother yells "Are you polishing your trophies again?" and in one scene, a penguin's genitals are "blurred out."

Slightly disturbing images include a photo of Cody's dad about to be eaten by a shark and footage of the Z's wipeout wave when he supposedly died. Tank punches Cody.

The underlying message is to follow Big Z's motto: "Never give up ... find a way." Cody's determination gets him the chance of a lifetime.