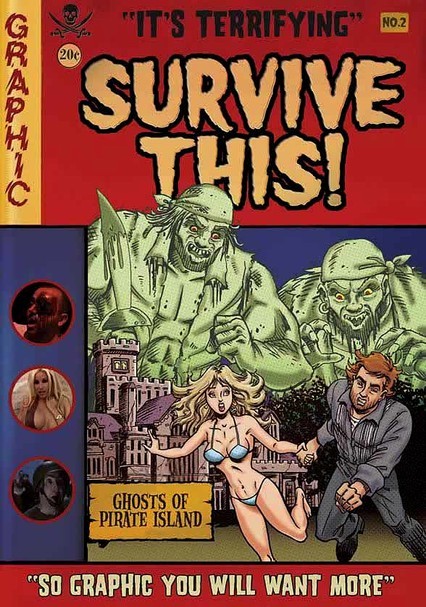 2005 NR 1h 30m DVD
When the cast and crew of a sexy new reality show begin production on mysterious Pirate Island, the torrid on-camera action is soon overshadowed by the lethal activities off-camera when the contestants begin turning up dead. Now, the sexy starlets are up to their bikinis in haunted happenings as everyone tries to find a way to be the final survivor. Gina Lynn, Dale Resteghini and Jill Nicolini star.

Parents need to know that this reality show about eight teens thrust into actual survival situations features simulated set-ups (like a bus crash in the middle of the woods) followed by very real demands (building their own shelter and sleeping out in the forest for several days, etc.). There are some scrapes and bruises but no real injuries, and medical experts are available if necessary. It's not a contest, and nobody gets voted out; the point is to see which teens can rise to the occasion and which ones decide to go home when host Les Stroud "Who wants out?" (Speaking of Stroud, this show is slightly more intense than his original Survivorman because of the heightened drama among the teen participants.)

Some flirting, but thatâ¿¿s as far as it goes.

Some of the survival situations are based on simulated incidents, such as a dangerous bus crash, and some of the participants are involved in minor accidents (medical experts are on hand if necessary), but there's no actual violence.

The eight teenage participants, drawn from all over the country, fit into clichÃd social roles -- such as the Princess, the City Boy, and the Tough Girl -- and are frequently identified onscreen with these labels. There's some tension between the teens, mainly between those who are willing and able to tough it out in the woods and those who canâ¿¿t, or wonâ¿¿t, do their share.