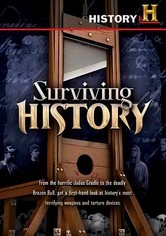 Parents need to know that this series follows a team of artists and craftsmen who re-create and test ancient weapons and torture devices, trying them out on both on mannequins and willing humans. While there's an educational component to the show, much of the focus is on the destruction, pain, and suffering that these devices caused. Although no one gets hurt, the fake-but-gruesome images of blood and gore -- as well as the endless discussions of fear, torture, and death -- make the show pretty iffy for younger viewers. Also, most of the experiments are extremely dangerous and should not be imitated.

Historical illustrations occasionally show people being tortured in various stages of undress; bare breasts are sometimes seen. These images aren't sexual and are shown in a historical context. One of the devices studied is the chastity belt.

Lots of discussions about and demonstrations of how devices were used to torture, punish, and/or kill people. Lots of fake blood and gore, including gruesome re-creations of the injuries incurred. Some of the design team members are shown using swords and other devices to "kill" mannequins after they're used in experiments.

Words like "ass," "hell," and "brass balls" are audible, while curse words like "f--k" are bleeped out.

While there's some teaching here, much of the show's focus is on highlighting the painful, gruesome impact that historical devices had on people. The team is male and Caucasian; occasionally a female administrative assistant participates in some of the experiments.

Prominently features The Scare Factory company; many of their scary re-creations are visible throughout the factory floor.