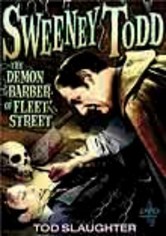 1936 NR 1h 7m DVD
This grisly yet darkly funny tale was based on a true story (and would later inspire Stephen Sondheim's acclaimed musical). The title character, Sweeney (Tod Slaughter), is a vengeful barber who kills his customers. In a convenient partnership, baker Nellie Lovett (Stella Rho) helps Sweeney dispose of the bodies by using the victims as ingredients in the meat pies she sells in her shop. George King directs; Eve Lister co-stars.