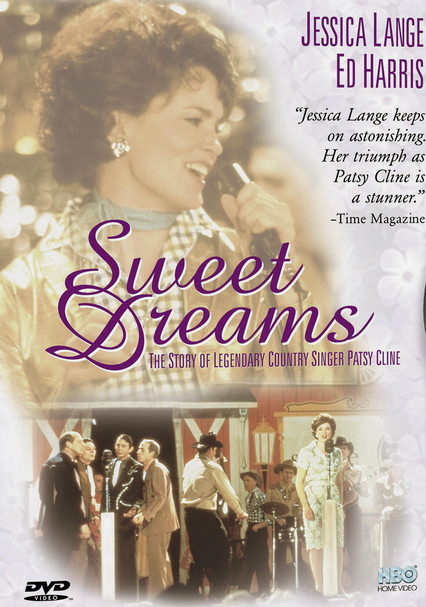 1985 PG-13 1h 55m DVD
As one of country music's first female stars, Patsy Cline brought sophistication to the Nashville sound. This film chronicles her rise to fame, focusing on her troubled marriage to the charming and confident Charlie Dick (Ed Harris). When the pair marries, Cline (played by Jessica Lange in an Oscar-nominated performance) gives up her career to raise their children -- until Dick goes into the Army. Then, the songbird resumes her rise to stardom.

Parents need to know that with its scenes of domestic violence and frequent profanity, Sweet Dreams pushes the limit of its PG-13 rating. While the movie tells the story of Patsy Cline's rise to stardom and features her indelible musical performances, the emotional emphasis is on the passionate and abusive relationship between Patsy and her husband, Charlie. Their fights move from early scenes of mutual angry words to Charlie's ultimately graphic and brutal beating of his wife. In addition, there is a devastating auto accident which results in bloody injuries and ugly scarring. The final action is suspenseful and horrifying as a plane crashes and explodes with four passengers inside. Drinking, drunkenness, and smoking are continuous throughout and alcoholism plays an important role in the tragedy of Patsy's life. There's lots of swearing and name-calling: "ass," "s--t," "hell," "t-ts," "screw," and more.

Many romantic scenes, some of which are limited to passionate kissing, dancing, and necking; others take place in bed and feature either foreplay or post sexual cuddling. There is some extra-marital flirting and implications that adulterous sex has taken place. No overt sexual activity; no nudity.

Several scenes depict escalating acts of domestic violence: a couple throws food at one another; mutual hard slapping; finally, the husband brutally beats his wife, pummeling her and throwing her to the ground. A major car accident occurs, the victim is shown bloodied and injured. Her treatment includes close up views of facial stitching. A plane crashes into a mountain instantly exploding and killing the four on board.

Included in this sometimes uplifting story of what it takes for a talented performer to reach her goals is a cautionary tale about the destructive effects of alcoholism and one woman's inability to change a volatile and abusive marriage. The film presents a very real picture of a relationship in which passion and fury live side-by-side with an ugly outcome.

Set in the late 1950s and early 1960s, many characters, including Patsy Cline and her husband Charlie, smoke continuously. There is heavy drinking throughout as well: Charlie is portrayed as an alcoholic, subject to violent outbursts when he's drunk. Characters are shown drinking beer in almost every setting; numerous scenes are set in bars and roadhouses with lots of alcohol consumed and many incidents of drunkenness.