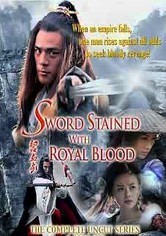 2007 NR 6 discs
Family honor and revenge fuel this epic television series set at the end of China's Ming Dynasty. Driven by vengeance, Yuen (Bobby Dou) -- the sole survivor of an attack on his family by corrupt constables -- seeks to train in the art of kung fu. After the massacre, Yuen meets a mysterious man and a beautiful swordswoman (Shen Yi Huang) who teach him the way of the Golden Snake Sword. His eventual revenge is a spectacle of grace and fury.