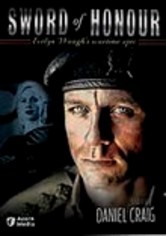 2001 NR 2 discs
Daniel Craig stars as Guy Crouchback, a soldier whose desire to prove his worth to his ex-wife leads him into a life of unrealized military ambitions in this miniseries based on the darkly comic novels of Evelyn Waugh. While Guy's timorous and largely undeserving cohorts climb through the ranks, he continuously falls short of his goals despite his earnest intentions, doomed to suffer the humiliation and discouragement of his misfortunes.