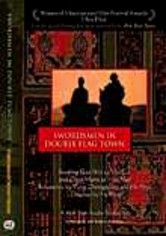 1991 NR 1h 30m DVD
A determined man vows to make his father's dying wish come true by journeying to Double Flag Town to claim his promised bride. Upon arriving, he kills a man who's about to rape his wife-to-be. Unfortunately, this righteous act infuriates the rapist's evil brother, and now it becomes a question of deciding whether to flee or throw down the gauntlet and fight the lethal swordsman.