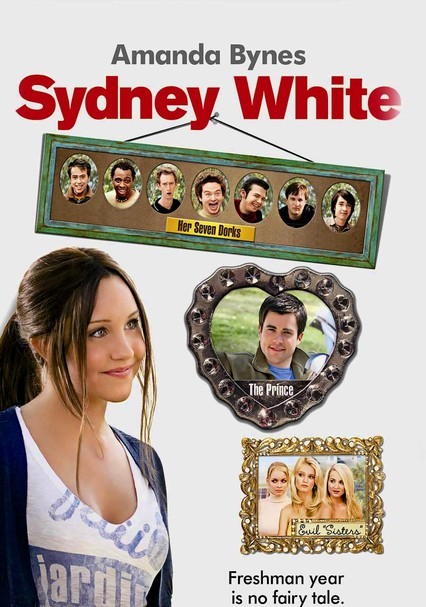 2007 PG-13 1h 48m DVD
After discovering that her sorority is a nasty, backhanded clique, a disenchanted college freshman takes up with a group of seven outcasts and forms a band of merry misfits, challenging the school's social hierarchy.

Parents need to know that this take on Snow White is tween favorite Amanda Bynes' most mature movie to date. She's as sweet and down-to-earth as always, but the film's focus on college Greek life includes drinking (one character is applauded for breaking a "keg stand" record) and catty "mean girl" behavior (hazing, cruel put downs, and more). Characters use words like "bitch," "ass," and "ho"; there's some kissing, flirting, and innuendo; and characters obsess about the school's online "Hot or Not" list. All of that said, the movie's messages about accepting people for who they are and being yourself are on target for tweens and young teens.

Lots of flirting, with some kissing and talk of "hotties" and "hooking up." Spanky is obsessed with women and sex (he's enthralled by Sydney's sports bra, saying "that thing has touched boobs!"). Female characters' skimpy tank tops, shorts, sundresses, and bikinis prompt ogling among the guys. A scene in which Sydney eats ice cream with relish (with guys watching eagerly) prompts a comment of "this is a SO-rority, not a HO-rority." The school's "Hot or Not" list plays an important role in the plot. Male construction workers wolf-whistle at an attractive woman; Sydney matches them by whistling at cute boys. Sydney's dad attempts to explain the birds and the bees using plumbing supplies.

Mostly minor comic falls and tussles. Terrence's experiments are often accompanied with small explosions, and fire occasionally breaks out in the Vortex, but no one gets hurt. Rachel drives her golf cart through a phalanx of marching band students, who tumble to get out of her way. A few screen shots of a first-person shooter video game.

Lots of "mean girl" cattiness and cruelty, particularly during rush (the Kappa sisters are advised to target "cute pledges" and avoid "fat losers") and when the Kappas haze their new pledges (Rachel submits each girl to a blunt analysis of the flaws in her appearance, strafes pledges with water guns, addresses them as "skanks," etc.). But it's made very clear that everything Rachel does is unacceptable, and the movie's overall message is a positive one -- be true to yourself and accept others for who they are, and you'll be a lot happier in the end. There's also a fair amount of stereotyping; virtually everyone except Sydney fits into a "type" (spoiled sorority girl, geeky Star Wars nerd, bulky football player), and student groups are portrayed very one-dimensionally during the student council campaigning scenes. But again, it all ends up being used to reinforce lessons about diversity and tolerance.

Rachel is obsessed with labels (her "soothing words" are Gucci, Prada, Chanel, Armani, etc.), and the Kappa sisters are very materialistic in general (they look down on Sydney for having a plumber as a dad). Brands/products include a Mac laptop, MySpace, cell phones, and a Scooby-Doo nightlight.

No smoking or drugs, but a fair amount of both visible and implied drinking. During tailgate and fraternity party scenes, many students (most of whom are presumably under 21) are seen holding plastic cups; they're not explicitly beer, but it's implied. One character sets a "keg stand" record at the Beta party, earning lots of praise and applause. Some alumni (and possibly students) hold beer bottles at the tailgate, and Sydney and the guys attract people to their booth by offering "free drinks." Tyler mentions having to pick up a keg early in the movie, and the frat house boasts an impressive beer-can wall.