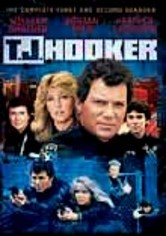 1982 NR 6 discs
Meet T.J. Hooker (William Shatner), a veteran cop who finds himself in the unfamiliar role of mentor to two new recruits (played by Heather Locklear and Adrian Zmed) in this popular 1980s television series. Catch all 26 episodes from the show's first two seasons, which have Hooker running the newbies through the paces to prepare them for the dangers that lie ahead. Extras include original promos for the show.