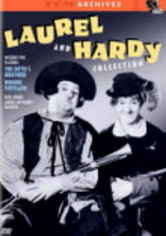 1933 NR 2 discs
Straight from the Turner archives, this two-film collection offers a double dose of classic laughs. In The Devil's Brother (1933), Stan Laurel and Oliver Hardy decide to become bandits and stir the ire of an infamous thief. And in Bonnie Scotland (1935) -- the pair's highest grossing film -- they accidentally join a regiment of soldiers bound for India. Extras include the 2002 documentary Added Attractions: The Hollywood Shorts Story.