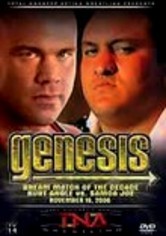 2006 NR 2h 40m DVD
In November 2006, in what was dubbed the "Dream Match of the Decade," Olympian Kurt Angle bared his fists against fellow grappler "The Samoan Submission Machine," Samoa Joe, in Orlando, Fla. Also included in this TNA compilation is wrestling icon Sting defending his world title against "The Monster" Abyss. Plus, the Latin American Exchange and America's Most Wanted spar in a world tag team title match.