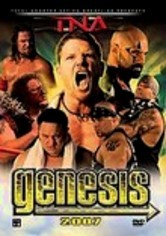 2008 NR 3h 30m DVD
Wrestling superstar Booker T makes his Total Nonstop Action debut in a thrilling tag team matchup, partnering with Sting against Kevin Nash and TNA champion Kurt Angle, with the winner taking the title in the main event of this exciting fight night. Other highlights from this action-packed lineup include Christian Cage taking on Kaz in an exciting ladder match and Robert Roode going head-to-head against Samoa Joe.