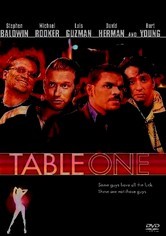 2000 R 1h 24m DVD
Four friends (Stephen Baldwin, Michael Rooker, Luis Guzman and David Herman) who are misfits in the New York City social scene have trouble meeting available women. They come up with the idea of opening a trendy restaurant -- funding their new venture with the help of a local gangster -- in hopes of attracting a large female clientele. It's one comedy situation after another as they stumble through their various misadventures.