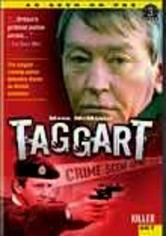 1983 NR 3 discs
As British television's longest-running police drama, "Taggart" made a name for its star, Mark McManus, and brought the gritty streets of Glasgow, Scotland, to prime time. In this three-episode collection, Taggart and constable Peter Livingstone (Neil Duncan) team up to catch a serial killer; Taggart stumbles upon a woman's dismembered skeleton; and an opera diva is the prime suspect in the murder of her husband's lover.