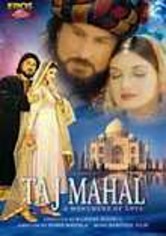 2003 NR 2h 22m DVD
Family dynamics (make that die-namics!) reign in this royal potboiler set in 1607. The Mughal Empire rules India, and it is the fervent wish of Khurram, son of the Emperor, to marry Arjumand. The Emperor is all for the union, but Khurram's shrewish stepmother forbids it (she wants her daughter to be the next queen). So begins a tale of burning passion and lost love with more nefarious plotting than you'll find in any five Shakespearean dramas.