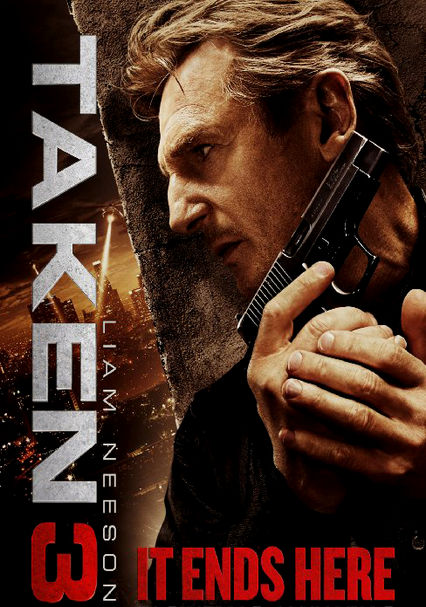 2015 PG-13 1h 49m Blu-ray / DVD
In the final installment of the hit action franchise, former CIA operative Bryan Mills is framed for murder and must use his covert skills to keep himself alive while trying to prove his innocence.

Parents need to know that Taken 3 is star Liam Neeson's "threequel" to the successful Taken and Taken 2. The violence is mainly bloodless, but there's a lot of it, including tons of shooting, fighting, guns, chasing, smashing cars, and explosions, plus some torture and war flashbacks. Main characters die, violence against women is shown, and a character being held at gunpoint grabs the gun, pushes it into mouth, and pulls the trigger. Language is infrequent, with a few uses of "s--t," "a--hole," "goddamn," etc. Kissing is shown, including a woman who kisses her ex-husband while she's still married to someone else. (She tells him she "fantasizes about us.") A man is shown with two bikini-clad women in a tub, and champagne and cigars are on display.

Kissing, including a woman who kisses her ex-husband even though she's still married to someone else. She says she "fantasizes about us." "Screwing" is mentioned. A gangster is shown in a bathtub with two bikini-clad women. A man is shown in underwear. A young woman is pregnant; a pregnancy test is shown.

Violence is mostly bloodless but nearly constant. Shooting, fighting, chasing in cars, explosions, and deaths. A main character dies. Kidnapping. A fight in a liquor store with breaking bottles. Beating with rifles. A man held at gunpoint grabs the gun, pushes it into his own mouth, and pulls the trigger. A man is tortured via waterboarding. Brief flashback to war, with shooting and throat-slicing. A man smacks a young woman in the face. Some minor bruises, cuts shown.

Infrequent language includes a few uses of "s--t." Also "a--hole," "goddamn," "jerk," "screwing," "scumbag," and it appears as if a use of "f--king" was dubbed over with "screwing" (the character's lips don't match the audio).

The hero is a supreme problem-solver who uses his head and the resources at his disposal. But he lives in a world where bad things continue to happen and violence is usually the only solution. The movie presents vigilantism as justified.

Characters briefly smoke cigars. Gangsters are shown with nearby glasses of champagne. An unopened bottle of champagne is shown. Bad guys say, "Let's go get drunk."