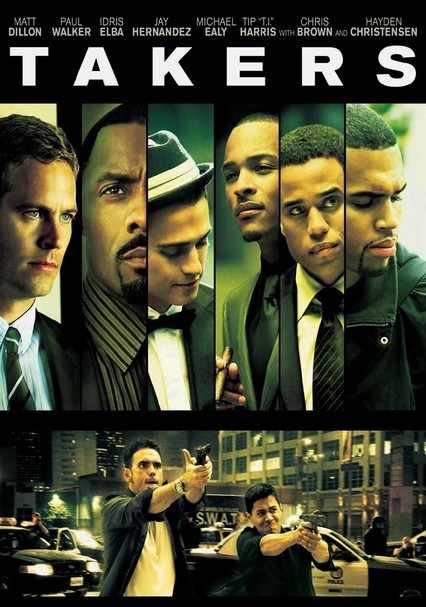 2010 PG-13 1h 47m Blu-ray / DVD
With their eyes on a huge payoff, a motley crew of bank robbers plan out their next heist. A former colleague convinces the boys to target an armored car carrying $20 million. But a detective tries to make sure the thieves never pull off the scheme.

Parents need to know that violence permeates this action-oriented heist movie, which co-stars headline-grabbing musician Chris Brown. Many characters die without consequence, and violence seems to be a way out -- or an ending -- for most of the characters. Language is strong, with many uses of "s--t," "goddamn," and "bitch." Many characters smoke cigars or drink champagne or fine scotch as status symbols, and a supporting character has a drug problem (though viewers never see her take drugs). In one scene, one of the robbers wades naked into a pool where two pretty girls are waiting for him, but nothing sensitive is shown. Don't look for positive messages or role models here; ultimately, this is a movie about a bunch of criminals doing what they do best.

After a successful heist, a character celebrates by wading naked into a pool where two pretty girls are waiting for him (no sensitive body parts are shown). A man proposes to his girlfriend, and they kiss passionately. Some sexual banter.

The movie is filled with over-the-top action and fighting sequences. Characters single-handedly take on many opponents, and there are acrobatic chase scenes throughout the city. Guns are drawn, and shots are fired, sometimes resulting in dead bodies. There are few consequences to these actions, other than "an eye for an eye." Several explosions.

The five robbers often demonstrate good teamwork, but it's always in the name of crime. Characters can't trust one another in this movie, and several are hiding something. Violence is committed without consequences, and more often than not, violence is seen as a way out.

A McDonald's billboard is seen in passing.

A supporting character has a drug problem and is in rehab; she checks out early and falls off the wagon. She's never seen doing drugs, but another character refers to her as a "crackhead." She also smokes cigarettes. Other characters smoke cigars, as well as sample champagne and fine scotch (though no one gets drunk; these things are mainly used as status symbols).