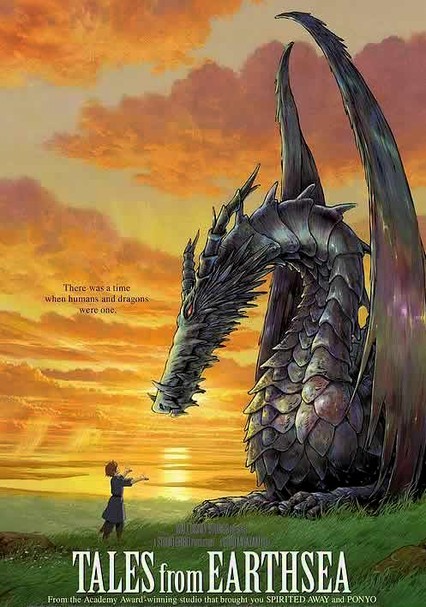 2006 PG-13 1h 55m DVD
Based on Ursula K. Le Guin's best-selling Earthsea novels and produced by the studio responsible for Spirited Away, this animated adventure tells the magical tale of Arren (Matt Levin), a teenage prince who must solve the riddle of his realm's decay. Arren runs away from home after killing his father, and during his journey, meets powerful wizard Sparrowhawk (Timothy Dalton), young sorceress Therru and deadly warlock Lord Cob (Willem Dafoe).

Parents need to know that this animated movie -- based on the classic fantasy novels of Ursula K. Le Guin -- is rated PG-13 for a reason: It has many violent/scary scenes, including two dragons in a bloody aerial battle, a teenager stabbing his father to death, a character being chased by wolves, slave traders capturing innocents and holding them in chains, lots of sword and knife fighting (with lots of damage and blood), and a wizard morphing into a series of monsters, beasts, and skeletons. The movie deals with complicated mythic concepts and mature ideas such as "to deny death is to deny life" that aren't fully explained and could be hard for younger kids to grasp. Female characters mostly fill traditional roles, and there's one mention of child abuse, with the resulting facial scarring visible on a young girl.

Lots of action sequences, beginning with a bloody battle between two dragons that's quickly followed by a young boy stabbing his father to death. Major characters are in jeopardy many times, including scenes in which wolves with teeth bared chase a teen, structures collapse with heroes inside, evil henchmen capture citizens and imprison them as slaves, sword fighting to the death (in one shocking swordfight scene, a severed hand flies into the air and bleeds copiously), a nightmarish sequence in which a wizard is shown drowning in black oil, and a ghostly monster capturing a young girl.

The movie's ultimate message is that the world needs to be in balance in order to sustain life. Good triumphs over evil, and the cycle of life is necessary for survival.

In one scene, as a dealer tries to entice the film's hero with an addictive recreational drug, a group of young people can be seen under its influence, barely conscious.