Tales from the Gimli Hospital 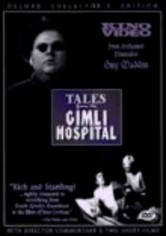 Tales from the Gimli Hospital

1988 NR 1h 8m DVD
Acclaimed director Guy Maddin's surreal feature film debut focuses on the intense battle between hospital roommates and friends Einar the Lonely (Kyle McCulloch) and Gunnar (Michael Gottli), who compete for their nurses' attention by telling increasingly complicated stories. Shot in black and white and employing techniques from the silent era, this unique film captures the sense of being trapped in another person's dream.