Tales from the Grave 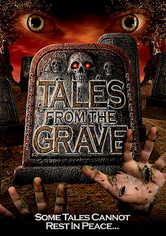 Tales from the Grave

2006 NR 1h 25m DVD
These three bone-chilling tales derive their plots from the dark secrets of the graveyard. In Beyond Death, a film crew accidentally reanimates a corpse when they break into an abandoned hospital to make a movie. In Brides of the Dead, a reality show forces five beautiful models to enter the haunted site of an unthinkable matrimony. And in The Rotten Dead, a witch vows vengeance on the three hooligans who unwittingly helped murder her son.