Tales of Voodoo: The Rapist / The Devil 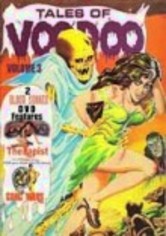 Tales of Voodoo: The Rapist / The Devil

1981 R 3h 0m DVD
Martial arts madness goes haywire in this thrilling double feature from Hong Kong horror meisters. Both films focus on revenge, the first from victims of a serial rapist, and the second from the ghost of a murdered girl. In The Rapist, a criminal gets his just rewards for all the havoc he's wreaked on women. In The Devil, a girl's murder leads to a spell that causes everyone around her ghost to start vomiting snakes and worms.