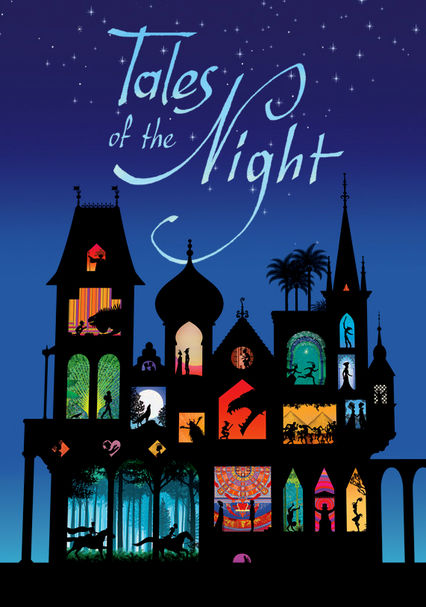 Parents need to know that Tales of the Night is a uniquely-styled animated feature composed of six folk and fairy tales and some fairy tale mayhem: a dragon must be felled; a werewolf must be stopped; a princess must be rescued from an evil sorcerer, etc. All humans and animals are seen only as black silhouettes, which lessens the impact of bared teeth, ferocious growling, and springing attacks of the villains. What might be played as scary or gruesome in other animated movies is dealt with delicately here. Kids who understand the difference between make-believe action and real violence should have no trouble. Positive messages are inherent in each story, and each also introduces a different part of the world (i.e., Africa, the Caribbean Islands, Tibet). The movie was originally made in France with English subtitles, but it's well-dubbed into English for the American DVD release.

In one of the six stories it is suggested that the African female characters, all portrayed as black silhouettes, are bare-breasted.

Heroes (male and female) are attacked and battle dragons, a bear, enormous bugs and "critters," warring tribes with spears. They are faced with the threat of death by "the big chopper" -- named but unseen -- as well as corrupt, oppressive leaders. Characters in the various stories are: imprisoned in a fortress, lost in "the country of the dead," as well as faced with being sacrificed to a beast. Living creatures are all depicted as black silhouettes; the villains often have glowing eyes and jagged teeth. Spoiler alert: In one story, a beloved horse must be killed and his heart eaten to save a princess -- it's handled delicately, off camera.

All six stories have positive messages (some subtle; some overt). Overall, honesty, bravery, resourcefulness, compassion, and unselfishness triumph, while greed, a desire for power, and deceitfulness are defeated.