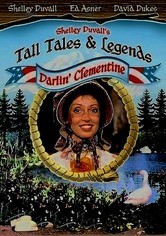 1985 NR 0h 52m DVD
Actress Shelley Duvall played host for this 1985-'88 anthology series about fabled characters and historical events. Set during the Gold Rush, this episode follows the titular Clementine (Duvall), an awkward but sweet girl living in a mining camp. One day she meets Levi Strauss (David Dukes) and the two soon fall in love -- but she turns down his marriage proposal until he promises to follow his dream of becoming a tailor in San Francisco.