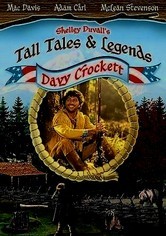 1985 NR 0h 50m DVD
Shelley Duvall's entertaining series examining America's legends takes on the mythology surrounding frontier legend Davy Crockett, whose courage, independence and deep sense of justice have inspired legions of old and young alike. Known for spinning wild tales about his exploits while serving his stint in Congress, this lively native son of Tennessee captured the imagination of his peers and continues to do so today