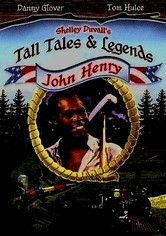 Parents need to know that there are some intense scenes in this retelling of the legend of John Henry, but it is well-done and designed not to be overly upsetting.

Some intense scenes of physical labor.