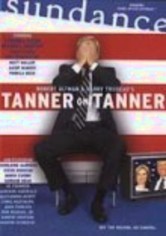 2004 NR 1h 9m DVD
Showtime's miniseries follows up on former presidential contender Jack Tanner (Michael Murphy) and his documentary-filmmaker daughter Alex (Cynthia Nixon) 16 years after Jack's failed foray into national politics. Directed by Robert Altman and written by Gary Trudeau (who both won Emmys for the original series, Tanner '88), Tanner on Tanner channels the energy of the 2004 presidential campaign season while skewering the politics of politicking.