Tarzan and His Mate / Tarzan Finds a Son! 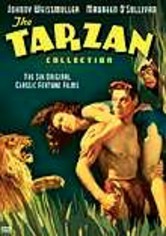 Tarzan and His Mate / Tarzan Finds a Son!

1934 NR 3h 6m DVD
This double bill featuring Tarzan and His Mate (the sequel to 1932's Tarzan, the Ape Man, starring Johnny Weissmuller) and Tarzan Finds a Son continues the adventures of the ape man beyond the initial relationship he establishes with Jane. In the first film, explorer Harry Holt (Neil Hamilton) travels to Africa to convince Jane to return to London. In the second, Tarzan (Weissmuller) and Jane (Maureen O'Sullivan) raise a young orphan boy.