Taste at the Top: Francois I of France / Charles I of England 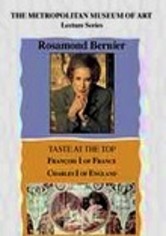 Taste at the Top: Francois I of France / Charles I of England

1995 NR 1h 55m DVD
Settle in for a sold-out lecture series at the Metropolitan Museum of Art delivered by &NFiL'Oeil&NFi_; magazine co-founder Rosamond Bernier, a woman who moved in circles with some of the greatest artists of the 20th century. This two-part installment focuses on Francois I of France, a monarch with an uncommon thirst for painting, sculpture and architecture; and Charles I of England, a man who amassed one of the greatest art collections of his day.