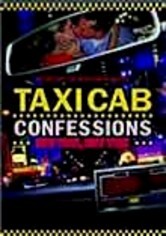 1995 NR 0h 52m DVD
There's no place like New York for rhapsodizing over life's joys -- and falling into melancholy about its tragedies. In this special episode of HBO's groundbreaking series, the documentary show returns to the Big Apple after an eight-year hiatus. The program sets up shop once again to see what stories of love, lust and life cabbies can coax out of their passengers; the results are colorful confessions and surprisingly candid conversations.

Parents need to know that this titillating reality series (which first aired on HBO in the mid-'90s) reveals real people's raw, risqu stories via probing questions from their cab drivers. Hidden cameras film passengers as they vividly describe experiences with sex, drugs, and violence. Passengers include married couples coming to Vegas to "swing," transsexual prostitutes talking about the violence they've experienced, and young women who describe themselves as concubines to married men. It's a truly voyeuristic experience -- and because of its sex, violence, and language, it's not for kids or even young teens.

People share vivid details about their sexual experiences, including some that are adulterous and within " open relationships." Prostitutes speak of what they will and won't do. Women and men wear sexy clothes and reveal their body parts to cab drivers.

Stabbings and beatings (sometimes during sex or related to sexual orientation) are described. Descriptions of weapons (knives, guns, fists) and actions taken with them.

Women are often described as being used just for sexual pleasures. Transgender individuals share the fear and violence they've experienced. Many men are looking for women who are skinny and have large breasts.

Fast food is sometimes shown in the taxi.

In most episodes, riders talk about drinking and, sometimes, using drugs.