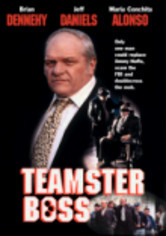 1992 R 1h 51m DVD
Brian Dennehy stars as power-hungry Jackie Presser in HBO's biopic of the controversial labor leader. The story follows Presser as he succeeds Jimmy Hoffa as Teamsters union president and rises to power by manipulating both the Mafia and the FBI. As he navigates his organization through rough waters, the union boss's relentless ambition earns him powerful allies and dangerous enemies. Eli Wallach, Jeff Daniels and Maria Conchita Alonso co-star.