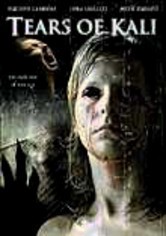 2004 NR 1h 46m DVD
This creepy three-part tale is constructed from a trio of short films that form a narrative about a mysterious cult. In the first installment, a reporter talks to an institutionalized cult survivor who claims to have murdered her boyfriend. In the second part, a man awakens to discover that he's been beaten senseless by his therapist. And in the final chapter, a faith healer exorcises a spirit only to find he's released it into his cellar.