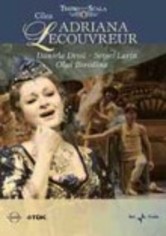 2000 NR 2h 18m DVD
Daniela Dessì stars as the ill-fated titular character in this lush adaptation of Francesco Cilea's most celebrated opera, which dramatizes the life and mysterious death of the famous 18th-century actress. Staged at the Teatro alla Scala in 2000, the production also stars Sergei Larin, Giorgio Giuseppini and Olga Borodina and features conductor Roberto Rizzi Brignoli at the helm of the Orchestra and Chorus of the Teatro alla Scala.