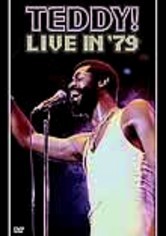 1979 NR 1h 20m DVD
Soul man Teddy Pendergrass got his start singing doo-wop on the street corners of his native Philadelphia and singing gospel in a church where he was ordained a minister at the age of 10. He went on to become the first African-American vocalist to sell five platinum albums in a row. This video features the R&B artist in his prime (before his paralyzing car crash in 1982), capturing the heat of a classic live performance filmed in February 1979.