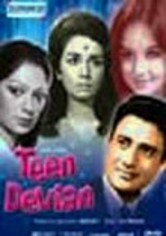 1965 NR 2h 2m DVD
Blessed with a beautiful voice, a handsome face and a way with words, Devdutt (Dev Anand) has a knack for attracting female affections. But what happens when three women want him at once? That's the predicament he finds himself in when the beautiful and wealthy Nanda (Nanda), Simi (Simi Garewal) and Kalpana (Kalpana) would each like to call him their own. But who will ultimately win bragging rights?