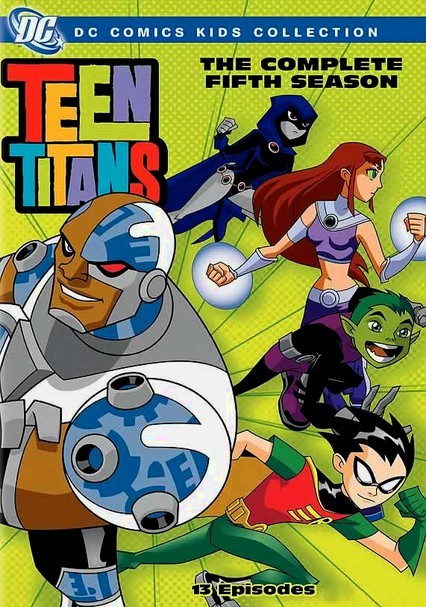 Join superteens Robin, Cyborg, Beast Boy, Starfire and Raven for more crime-fighting adventures in Season 2 of the animated series based on the popular DC Comics characters. This season, the kids find time for fun in the sun even though their powers are put to the test fighting a ghostly force, Killer Moth, Johnny Rancid and other dastardly villains. Extras include the virtual tour "Inside Titans Tower" and "The Arachnid Challenge."

With no annoying restrictions such as school or secret identities to hold them back, the adolescent fighting force known as the Teen Titans -- led by Batman's former sidekick, Robin -- have plenty of time to save the world. In the third season of this animated series, Raven finds her books have magic qualities; Mad Mod crashes the Titans' Independence Day party; and Beast Boy gets doused with toxic waste.

Angst-riddled adolescent clan the Teen Titans are back for a fourth exciting season, coping with the challenges of being a superhero teen while taking on the world's most devious archvillains. When the evil Trigon emerges to take down the Titans, Robin, Starfire, Cyborg, Beast Boy and Raven push the limits of their superpowers and explore the strength of their friendships.

Superhero teens Robin, Starfire, Raven, Cyborg and Beast Boy continue to battle a rogue's gallery of scoundrels to save the world in the fifth season of this hit animated series inspired by DC Comics. When their greatest enemies, the Brotherhood of Evil, return with a dastardly plan to eradicate every teen superhero on the planet, the Titans must draw on all their powers to save their contemporaries -- and themselves -- from the überthugs.