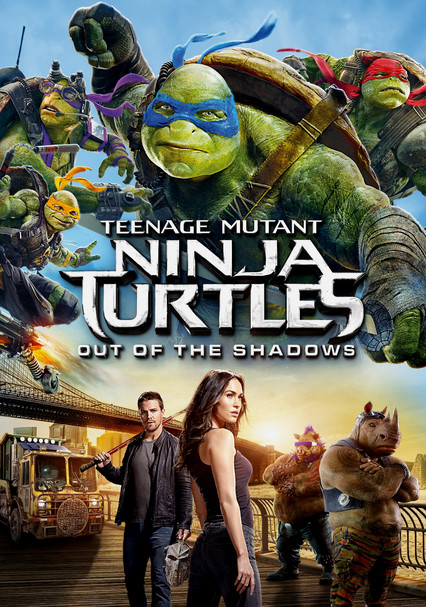 Parents need to know that Teenage Mutant Ninja Turtles: Out of the Shadows -- the sequel to 2014's Teenage Mutant Ninja Turtles -- finds the titular foursome back in action with their friend April to defeat the nefarious plans of Shredder, his Foot Clan, and a new supervillain. There's about as much explosive action violence (crashes, martial arts battles, and other hand-to-hand combat) as there was in the first movie. The language is amped up a little, with uses of "s--t" and "damn" as well as insults like "jackass," as is the bodily function humor (expect fart and booger gags). And while there a few suggestive jokes (in one scene, two men changed into humanoid animals check out their packages and high-five each other approvingly) and a sequence in which April wears a stereotypical "sexy schoolgirl" outfit, there's actually less innuendo here than in the original. Messages about teamwork and brotherhood are again present, and the Turtles work hard to defend the city.

Quite a bit of innuendo, although a little less than in the first film. April is ogled early on, especially when she changes into a midriff-baring top, a short plaid mini-skirt, and thigh-high tights to collect sensitive information from someone. In one scene, two men changed into humanoid animals check out their packages and high-five each other approvingly.

Plenty of violence, but much of it is from afar. It also doesn't show the inevitable deaths and injuries it causes -- like during a big chase sequence when police cars are blown up, flip over, and crash, or people fall off of motorcycles or moving vehicles, presumably to severe injuries or deaths -- which, while limiting gore, also minimizes the consequences/impact of the disasters. People are incapacitated, and the Turtles face a supervillain with super powers and extraterrestrial weapons.

The Turtles don't always agree, but they continue to learn the value of teamwork and how different opinions, perspectives, and talents strengthen a team's ability to succeed. They also teach the importance of collaborating with allies like April and Casey. Themes of brotherhood and of fighting together to protect others -- even those who will never know you're helping them -- are important to the story.

Adults hold drinks at a party.