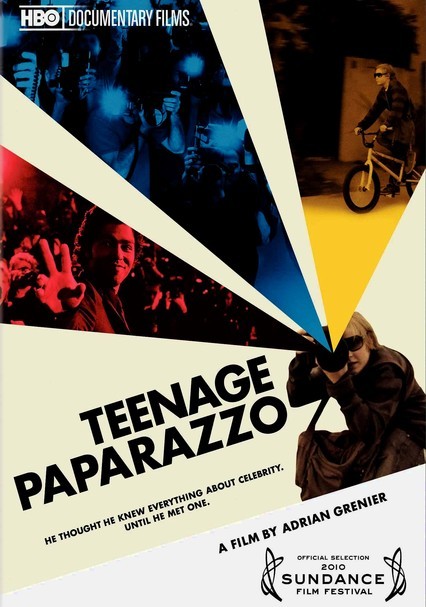 2009 NR 1h 35m DVD
Actor Adrian Grenier ("Entourage") writes, directs and produces this documentary that examines his connection to a 14-year-old paparazzo and explores the concept of celebrity in America by interviewing famous entertainers about fame.

Parents need to know that that this documentary directed by actor Adrian Grenier explores the relationship between celebrity and society by following a 14-year-old celebrity photographer. The film contains lots of strong language (including "ass," "pissed," "s--t," and "f--k"), scenes of paparazzi pushing and shoving each other to get closer to celebs (and occasionally celebs pushing back), and some crude sexual references. Beer occasionally appears onscreen, and there are references to being drunk and using drugs. The film also highlights some of the questionable parental decisions the teenager's mother makes in supporting her son's career.

Occasionally celebs are shown wearing bathing suits or sexy clothing. Visschedyk is occasionally seen in his underwear. A crude reference is made to Britney Spears' crotch.

The paparazzi push, shove, and punch each other to get close to celebrities. Occasionally celebs are shown getting violent toward paparazzi. Visschedyk carries pepper spray to defend himself if necessary. He is also shown playing with a BB gun.

Words like "ass," "pissed," "s--t," and "f--k" are frequently used, especially by the young Visschedyk himself.

The documentary explores the relationship between society's voyeuristic interest in celebrities and the role the paparazzi plays in satisfying this interest with insight into the ethical questions involved. It also looks at the negative impact the adult world of the paparazzi has on a 13-year-old.

Electronics like Apple computers and iPods, Verizon Androids, and other communication devices are visible. High-end cars like Lexus and Mercedes Benz appear. Tabloid magazines like US Weekly and tabloid TV shows like TMZ are featured.

Beer is occasionally visible. Drunk people are visible on the street where paparazzi hang out. References are made to cocaine and other drugs. Visschedyk makes a pact with his mom not to drink or use drugs in exchange for being permitted to stay out at all hours by himself.